This tour covered the Newark riverfront north of Route 280, its history and visions for its future. Along the way, participants documented what they found using cameras and maps. The day concluded with a workshop where we discussed ideas for the area and how people from Newark and beyond can make it happen.

Steel machines. It’s good to see things being made by people in Newark (like they have for hundreds of years).

We visited Innovation Fuels, which produces biodiesel on a site formerly owned by Standard Fuel. John Fox, one of the owners, told us how his operation uses barges and the nearby railroad to ship materials in and out. A jar of animal fat that will become biodiesel.

Innovation Fuel transforms fat, on the left, into biodiesel, on the right. 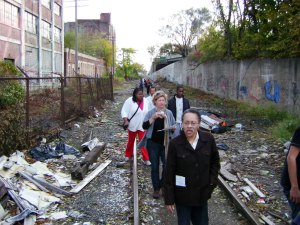 Graffiti wall known as Newark Wall of Fame along the rail spur.

At the end of our walk, we had juices at Mariela’s Café, across Broadway from Mount Prospect Cemetery, and talked about what we had seen.