Following last summer’s opening of Essex County Riverfront Park, Newark’s next segment of riverfront park is nearing completion between Oxford and Van Buren Streets. One of the park’s special elements is an 800-foot-long orange boardwalk built from recycled plastic planks.

Why orange? Many reasons. Here’s a few:

1. Since the boardwalk is made of recycled plastic, it didn’t need to be wood-colored.

4. Some of Newark’s nearest neighbors are East, West, South, and just plain Orange.

5. Like the orange things you see on a construction site, Newark’s riverfront remains a work in progress.

7. Orange is used in color therapy to induce hunger, and there are many delicious things to eat in Newark, from Brazilian hamburgers to Portuguese dry soups to Southern yams & greens to to Caribbean roti to old-school Italian ice cream.

8. In Hindu tradition, orange is the color associated with the second chakra, linked with the element of water. 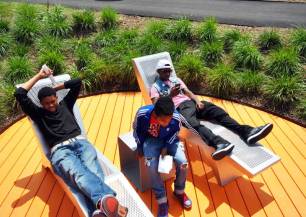 The Orange Boardwalk intersects with the path down from Raymond Boulevard near the Dancing Pavilion. 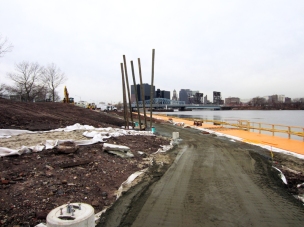 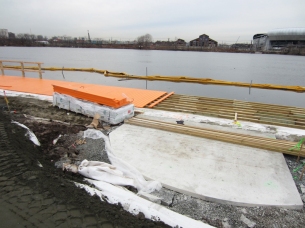